A couple of weeks ago I went back to my clinic.

I wrote here about how we were done with the clinic. DONE. Never returning.

I meant every word of it too.

And then, right around the same time that I reached my conclusion, the Ontario government announced that they were going to honour their promise to fund one IVF cycle (for any woman under 43, regardless of family status).

I will admit, that gave me pause.

And then I decided that their announcement didn’t change things, even if they had everything in place to start funding before the end of the year (which is a big if).

I realized that I wouldn’t go back to the clinic even if they PAID me.

Well, remember that cycle where I cut out dairy before ovulation and promptly ovulated on day 18?

The luteal phase from that cycle felt weird. Different from the last two.

And when I hit 12 dpo, and my temperature still hadn’t dropped (which it had never done before) I got curious. 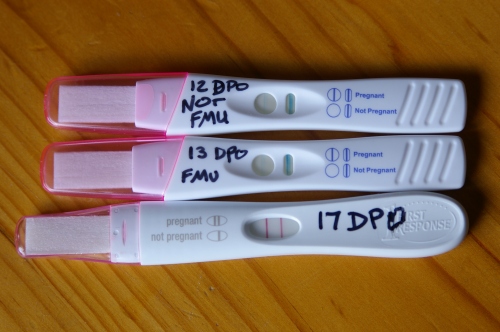 At 17dpo, I went back into the clinic.

They never called me (at my request) with the fourth beta as by that point I had taken up residence in Crazytown over the prospect of multiples, because the betas were higher than either of my two previous pregnancies (including the one that started as a twin pregnancy) and they were doubling faster. You were spared all of this angst because one of my sisters was on vacation, and I needed to tell her before I posted on the blog as both my sisters read it. When I managed to link up with her via Skype (the day before the fourth beta) she helped me pack my bags to move out of Crazytown, as she’s a scientist and she can crunch the numbers properly and I trust her. I knew that another fast doubling time would send me back over the edge, so I opted not to know.

Yesterday was the ultrasound.

And we saw this: 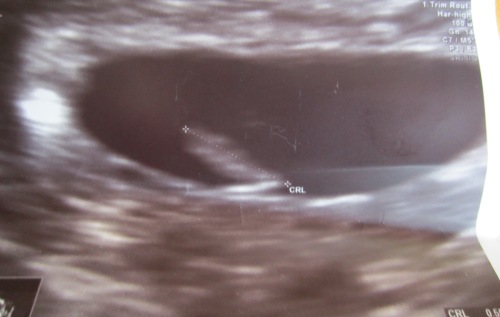 It is still early.

I have been here twice before, with only E. to show for it.

But it looks like we’re getting one more shot at this whole family of four thing.