When the wheels come off… (with bonus nursery pics)

Well, week 2 in the Turia household was a bit more eventful, in that I think my baby bliss hormones finally packed up and left and I ended up a) massively sleep deprived and incapable of sleeping during the day and b) overwhelmed by everything as a result, especially afternoon visitors which would disrupt any sense of routine we were trying to develop with E. and c) crying fairly frequently in said afternoons after visitors left.

So it was perfect timing on our part that my Mum arrived on Sunday and will be here for this week- it gives me someone else to pass E. to when Q. is trying to cook/clean/work, and it is keeping me from just sticking him on the breast every time he is remotely fussy- I’m learning from my Mum, who is a master burper, that a lot of the time the issue seems to be gas, and adding more undigested milk is not super helpful. And yesterday I finally got a bit of sleep during the day (it took three hours and a couple of feeding breaks to get there, but hopefully this will be the start of a better pattern).

It seems ridiculous, given that E. is by all accounts a very good and easy baby, but I just felt like my world was ending. I think Q. felt a bit stressed and helpless at the whole thing, because there wasn’t much he could do to fix it. I’m already sleeping as much as possible at night, and E. is giving us a couple good stretches, so most nights I get about six hours and some nights I get seven, but clearly while it was enough to keep me from going totally bonkers it wasn’t enough to keep me on an even keel.

So I’m very very glad to have my Mum here for the week, and we’ll be three weeks in once she leaves. And as I keep telling myself, and Q., the first six weeks are meant to be the hardest.

I was worried about post-partum depression, but I don’t think that’s an issue. I always feel great in the mornings- it’s just the late afternoon where I start to drag and find things harder to cope with (which nearly always coincides with when E. wants to feed more frequently and then starts to get gassy).

We had our two-week checkup today. On day 5 he weighed 7 lb, 9 oz. Today (day 16) he weighed 8 lb, 12 oz, so he has gained 19 oz in 11 days! The midwife was really happy with this and told us to just keep doing what we’re doing, and not to worry any more about waking him to feed. Now we can let him eat and sleep how he wants.

I got lazy with latching over the last couple of days and I can really feel the increase in soreness as a result, so I need to be more proactive about making sure E. doesn’t tuck in his lower lip.

We did start E. in his cloth diapers but we’ve been waylaid by a nasty diaper rash. I don’t think it’s from the cloth- it erupted when he had a couple of days where he pooed literally 15 times a day, so I think it was just a result of all that wiping and pooing. Hopefully it will clear up soon so we can go back to cloth (we’re using a barrier cream that isn’t cloth safe).

And, finally, I’ve got some nursery pics. Better late than never! 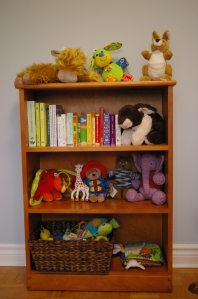 His bookcase, already nearly full with toys and books bought by his many admirers (seriously, Q. and I only bought the kangaroo).

His super-organized closet, shelves by Q. (which was a real challenge as the closet didn’t have a straight line anywhere!) 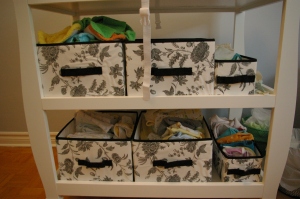 His super-organized change table. Fitteds, prefolds and wipes on the top shelf. Receiving blankets, onesies/sleepers and covers on the bottom shelf.

This is the wall where his crib will go when we transition him into the nursery. This is the best picture for showing the wall colour. 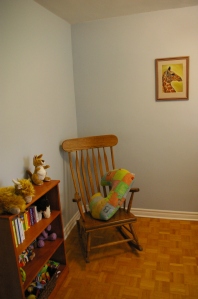 The rocking chair was a gift from a friend who received it from his family when his first daughter was born. The giraffe on the wall was made for E. by a good friend who is a very talented artist.

So, in summary, the transition did hit me in the end, and it hit hard, but I think we’re adjusting, and E. continues to thrive. Q. and I just love him to bits. Our midwife figures he might start smiling in a week or so, which I am so excited about!